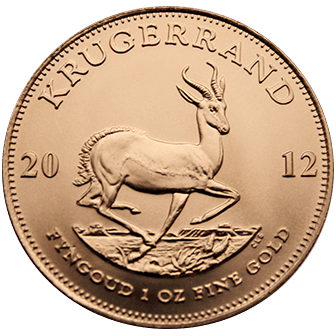 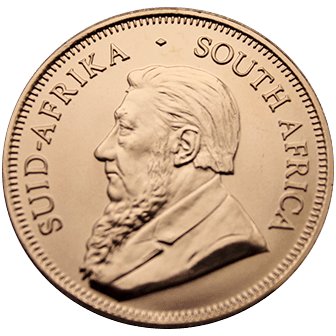 * Web Price Only. Online pricing is quoted in Real-time. Your price is set at moment purchase is finalized. Dates of coins cannot be chosen. Dates are determined by available stock, at the discretion of Metal Exchange staff.

Private mints have attempted to capitalize off the popularity of the Krugerrand, minting gold and silver bullion rounds (the term coin denotes legal currency) in the style of the Krugerrand. The rounds often depict Paul Kruger and a springbok antelope, some even blatantly copying the same design as on the Krugerrands themselves, though the inscriptions are altered. These bullion rounds are not offered by the South African Mint or the Government of South Africa, and are therefore not official, have no legal tender value and can not technically be considered coins.

The Krugerrand was introduced in 1967, as a vehicle for private ownership of gold. It was actually intended to circulate as currency. Therefore it was minted in a more durable gold alloy, unlike most other bullion coins.

Each purchase from The Metal Exchange comes with a complimentary copy of Precious Metals Profit Strategies, a $79 value. In this report we share with you relevant buy and sell strategies used by professionals to maximize their profit potential in precious metals.

System response and account access time may vary due to market conditions, system performance, and other factors.

© 2022 The Metal Exchange. All rights reserved.